Danny Briggs the latest Englishman to sign up for BBL|10

There was another impressive looking knock from the much maligned – in England anyway – James Vince, as he set his Big Bash team, Sydney Thunder, up for another win, with 40 runs from 29 balls.

Vince – who joined up with Sydney Thunder after the Ashes – opened the innings with Aussie Usman Khawaja, and the two of them all but finished the match as a contest, by putting on 85 for the 1st wicket, from just 8.2 Overs. Vince batted on into the 11th Over, and when he eventually went for an excellent 40, his team were 102/2, needing just 46 from just over 9 Overs.

Vince has 74 runs at a strike rate of 137.03 from his two matches for the Sydney Thunder so far, not world beating, granted. But given all the criticism he received during the recent Ashes, that isn’t a bad start for an opener, and it also gives England another white ball option. 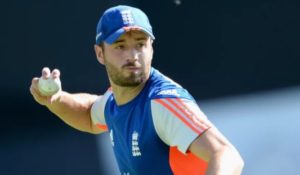 There is still a long way to go for Vince, but his Big Bash experience can’t do anything but help his development, and also – hopefully – build his confidence. These small steps could well be crucial ones if they are to have the desired effect of helping him develop into the top class cricketer his talent suggests he should be.